Who Will Watch the Watchers? will make its "Tennessee Premiere" at 7 p.m. on Thursday Sept. 28 in Room 250 of the Art and Communication Building on the University of Memphis campus. The screening is free and open to the public. The Memphis-made documentary had its World Premiere over the weekend in Los Angeles at the Justice on Trial Film Festival. 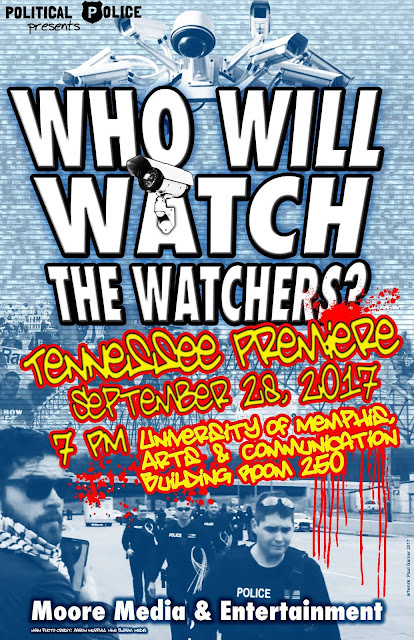 The film is set in the local and national context of 21st Century hot topics, such as filming police, Black Lives Matter, dissent in the Trump era and citizens getting “woke” to a society that leaves many behind.

The U of M showing is hosted by student Nic Bradley, whose funded project "Political Police" provides an archive of resources on activism and surveillance in Memphis. Bradley represented the film at the Justice on Trial festival in Los Angeles.

Told as a real-time narrative, the documentary feature tracks the struggles of Mid-South Peace & Justice organizing director Paul Garner, who is arrested for filming police then leads a grassroots movement to seek justice at City Hall in an election year. The story’s timeline reaches into 2017 and follows local and national events along the way.

A PEOPLE'S STORY
“This is a people's history of local activism in Memphis over the past three years," said filmmaker Gary Moore, who began following the grassroots movement while researching a narrative episodic series in development.

“The film includes never-before-seen footage and some content that would not make it into mainstream media.”

Following the film will be a panel discussion including the filmmaker, Bradley, Garner and civil rights attorney Bruce Kramer.

Filming began in 2014 after citizens were arrested while cell-phone recording police at Manna House homeless refuge and at a Trolley Night hip-hop event.  It’s an emotional roller coaster for citizens such as Garner, who was arrested twice for filming police and who led Memphis United grassroots coalition in a movement to bring back the Civilian Law Enforcement Review Board. In the middle of the campaign, a Memphis police officer shot and killed unarmed teenager Darrius Stewart after a traffic stop.

FILM CONSTANTLY UPDATED
The film also spans developments such as the 2016 Mississippi River Bridge shutdown where Interstate 40 bisects America and the mayor’s February 2017 blacklist of citizens who were ordered to be escorted by police if they entered in City Hall and arrested without warning if they showed up on his lawn. The film includes footage as recent as from the Aug. 19 action at Health Sciences Park to oppose Confederate statues.

Civil Rights hero and Freedom Rider Dr. Rip Patton of Nashville narrates the opening and closing sequences of the film.

The film includes graphic violence and profanity and has not been rated by the Motion Picture Association of America.

Moore Media & Entertainment previously produced the role-reversal comedy short, "The Suburban Itch," and is developing for television two episodic dramatic comedies: In The Pregnant Prick, a womanizing member of Congress changes his ways after he becomes pregnant -- due to global warming, scientists prove.  Second Coming is a what-would-Jesus-really-do series in which Jesus returns to Earth and exposes a televangelist and a crooked politician.
Posted by Citizens Media Resource at 6:06 PM No comments: