Minister-grandmother makes mayor's political black list: 'It's the Paranoia that Worries Me the Most'

Persons on the police and mayor’s “black list” of political activists showed up in front of Memphis City Hall on Tuesday Feb. 21 to challenge and “watch the watchers” who have conducted political surveillance, defying a 1978 DOJ consent decree against the Memphis police department.

As a grandmother and minister, Elaine Blanchard is an unlikely security threat. 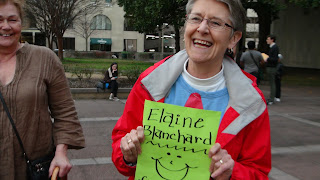 “At first I was amused,” said Blanchard, who works to help victims of sex trafficking pull their lives back together.  Yeah, that’s some criminal behavior.

“As days went by, it became increasingly less funny and more concerning and frightening,” said Blanchard, who is wanting answers about how and why police and the Memphis mayor came up with an activists political list, which some are calling the A-List.

“It’s the paranoia that worries me the most,” Blanchard said.  “I fear for the freedom of our city.”

Memphis police have massively over-responded to protests in the last year, including at Elvis Presley’s Graceland Aug. 15, 2016, and the Valero Oil Refinery on MLK Day Jan. 16, 2017.  At an environmental protest at Valero, arrests included an independent journalist and an observer who was live-streaming.

Link to Political Surveillance Lawsuit against City of Memphis:
file:///Users/garymoore/Google%20Drive/Blanchard%20et%20al%20Political%20Surveillance%20Lawsuit.html

Link to the “A-List:” https://www.documentcloud.org/documents/3468238-City-Hall-Escort-List.html

Link to story in The Commercial Appeal:  www.commercialappeal.com/…

Link to story on WMC-TV: www.wmcactionnews5.com/…