That is not a riddle or a trick question.  When the “watchers” – agents of the government including law enforcement – spy on citizens then make a “black list” of “protesters” and others, the result can be a lawsuit based on civil rights violations.

That was the outcome in Memphis this week when four persons sued in federal court after being named on a political list of 55 persons who must be “escorted” by police whenever they are in city hall.  The list was assembled by the police, and four pages of that list were signed off in writing by Mayor Jim Strickland.  A second lawsuit was filed in federal court on March 1 on behalf of "Fight for $15" minimum wage advocates who said police spied on their actions near fast food restaurants.

While the media called it a “black list,” we are calling it an “A-List,” because the common bond with those 55 persons on the list is that they are activists trying to make things better in the city and the world.  An additional 27 persons on the list were not political and were on the list for other reasons, police said, such as being disgruntled former employees or persons who had been involved in harassment or threats.

A List Weigh-In
In response, the A-Listers and their supporters held a rally outside City Hall on Feb. 21 -- an “A-List Weigh-in,” they called it, to challenge police spying and to spoof the mayor.  They passed out scarlet “A’s;” made beauty contest-type sashes out of caution tape; drew wanted posters of themselves, and stepped on a set of scales to see if the police posting of their weight lined up with their actual weight.

Ironically and amazingly, right when police and the mayor were under fire for spying on citizens and thus setting up possible DOJ sanctions and lawsuits,  police had several plainclothes officers in the plaza in front of City Hall and checking out what the A-Listers were doing.

The documentary feature Who Will Watch the Watchers? opens with Civil Rights hero and Freedom Rider Rip Patton pointing out the proliferation of citizen videos, surveillance cameras, in-car video and body-worn cameras and stating: 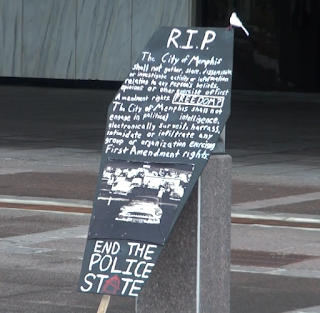 “It seems as though everybody….is watching anybody.”

One result of this has been the videos we have seen of police shooting unarmed men when the use of deadly force was uncalled for.  Officer Michael Slager said he shot and killed Walter Scott in North Charleston, S.C., in April 2015 in self-defense, fearing for his life.  Only because a phone video recorded by Feiden Santana showed Slager firing eight shots at Scott’s back as Scott ran away, then Slager dropping his taser near Scott’s body, was Slager charged with murder.

Camera-Shy
Police don’t like to be recorded, even though courts have consistently ruled it is a First Amendment right to film police.  In Memphis and basically everywhere in the country, there are instances of police arresting people to stop them from filming.  Typically those cases are promptly dismissed.  But, the police have succeeded in stopping the recording, and the citizen has the trauma of being arrested and jailed at least overnight, the expense of attorney fees and missed time from work.  Not to mention the likelihood of showing up on TV, the Internet and in print with his or her mug shot and being identified as a “suspect.”

While police stopping persons from taking their picture is one thing, it is quite another when police film citizens – or gather political intelligence – as the citizens are not breaking any laws and are practicing their First Amendment rights to speak out, assemble or disagree with government policies.

Spying on citizens reached a breaking point in Memphis, where Martin Luther King Jr. was assassinated in March 1968, in the mid-1970s, and the result was a consent decree propounded upon the Memphis police department by the Department of Justice.  The DOJ order essentially said, do not abridge citizens’ First Amendment rights, and it focused on gathering political intelligence on citizens.

“Who Will Watch the Watchers?” and variations of that question are usually traced to Roman satirist Juvenal, who wrote in Latin:  “Quis custodiet ipsos custodes?”   Quite a kidder, that Juvenal, who was poking fun at the “rulers” who had guards watch their women to protect them from harm or seductions from other men. However, it’s a fair question, Who is protecting the women from the guards themselves?
Some have joked that they wished they had made the Memphis police A-List as something of a badge of honor.
“It’s not funny.  There’s nothing good or fun about being on this list,” said one of the lawsuit plaintiffs.

"At first I was amused," said minister and grandmother Elaine Blanchard (video below), who was one of the four plaintiffs.  "Then it became increasingly less funny and more concerning and frightening."

Freedom Rider Patton concludes the documentary Who Will Watch the Watchers? with these words:


“It is each and every one of us who must watch the watchers.”

Link to Political Surveillance Lawsuit against City of Memphis:
https://drive.google.com/file/d/0B-FgLYWZIRu6ZmNtd1BsSjJCRFk/view

Link to the “A-List:” https://drive.google.com/file/d/0B-FgLYWZIRu6MjRXa1hYVlltODg/view

Link to story in The Commercial Appeal:  www.commercialappeal.com/…

Link to story on WMC-TV: www.wmcactionnews5.com/…